You would think that after running the entire North Island in 34 days, I would have a little bit of confidence going into the South Island right? Wrong.

We boarded the Interisland Ferry a few hours after I completed the North Island. This is where I began to unravel – getting super stressed out about the next section. About the mountains. About the river crossings. About what happens when our friends, who were joining for the next 10 days, leave.

I was a total mess and on the verge to tears, which spilled over big time when we hit Picton. Miserable. Tommy tried to console me without much luck. I also chatted to a friend back home to try, who pointed out that I seem to have these melt downs when I am stationary. My mind runs away when it has too much time to think.

That said, before I could get too far into my own head, the first day of South Island started out with a bang. Tommy chaperoned me to a small tourist transfer boat which took me out to the start of the stunning Queen Charlotte Track.

It is also here where I joyfully picked up our friends, Nicki and Mat. Having these two legends from back home, who are among the nicest and most uplifting runners you could be around, was an amazing boost. But sadly, at the very back of my mind, I just knew having them around would make it even harder when they left. But that was a while off yet so I just got on with having as much fun as I could.

After this stunning and positive start to the South Island, we then went into the notorious Richmond Ranges. They are known for very steep and technical terrain – arguably the hardest in the whole country. Just as we were getting ready to tackle this section, the sky opened up and we got torrential rain. Rivers rose, roads flooded.

We talked through what we should do – wait or go – but all agreed was a no brainer to wait. I got some comfort in making a smart call and waiting another day to mentally prepare. But it did further highlight one of my biggest fears - rising rivers. Instead of heading into the mountains, we ran 12km to the trailhead and spent the arvo hanging around Havelock, drinking coffee and the odd beer. It was a pretty good tonic for my nerves and another great unplanned fun memory.

The following day we went for it. Lucky for us, this terrain was similar to what we have back home – mountains, mountains and more mountains – so we felt like we were in our element. The only difference was that we would be staying in huts for three nights so had to carry all our kit and food with us.

Day 2 featured three big climbs including going up the screen covered Little Rintoul (which was not little) and Mt Rintoul. These were slow but the views made up for it.

Day 3 was memorable for good and bad reasons. Bad because we had to do 7 crossings of the Wairo River, which was flowing incredibly fast. These crossings are really mentally taxing and we were all wrecked by the end of the day. Good because we had absolutely stunning views that stretched right to the coast from the top of Red Hill.

Day 4 was a death march. We just wanted to get to the van.

We had conquered the Richmond Ranges and next up was Nelson Lakes, including the mighty Waiu Pass. Unfortunately, Mat had succumbed to shin splints so it was just Nicki and I heading out for 2 nights in huts. Mat would stay with Tommy in the van.

Nicki and I were on a mission. The schedule says four days but we agreed that we would try to finish in three so we could have Christmas Day off!

Day 1 was easy. We zoomed through the first 20kms which were flat. We went up and over Travers Saddle and made it to the West Sabine Hut in good time. We were on track.

Day 2 was hard. Really hard. We had heard that part of the track had been washed away recently so we started at 6am to give ourselves a little more time. Huge chunks of the track had collapsed into the river which sent us bush bashing around them. It took us over 3 hrs to get through a section which would normally take 1.5hrs. We were literally crashing our way through a wall of trees and bushes.

We continued up, taking in Blue Lake and Lake Constance which have some of the purest water in the world. The track wasn’t very formed – we stumbled our way across tussock and up scree slops. We had a quick regroup at the bottom of the Pass.

The Pass was basically a huge scree slope, which wasn’t too bad as it made for consistent footing. We slowly picked our way up and had some celebratory Whittakers at the top. Then it was a slow, boulder hopping descent back down to the river, which we followed all the way to Waiau Hut, which has only 6 beds. We arrived at 4:30pm but the hut was already full. Our options were to push on or sleep on the floor. We decided to take a punt and keep going to Anne Hut, which was 22km away.

We ran/hiked to Ada homestead, about 15kms along. The views were particularly beautiful with horses running in the dying sunlight. We reached Ada River at 8pm and started scoping out a safe place to cross. It was hard to find a suitable place as the sun was sinking and cast a shadow over the river so we couldn’t see the bottom. We attempted one spot but then pulled out as the current was too strong. We walked about 1km up the river where we found a spot where we could see the bottom. We pulled ourselves together and got across using the river crossing technique. Phew!

We reached Anne Hut at 9:45pm, had a baby wipe shower and crept inside. The next day, we were knackered. But it was only 30kms to Boyle Village where the boys would meet us and we would have a rest day the next day – Christmas Day! We arrived at 2:30pm and had a beer in hand by 3:30pm at the campsite. Bliss.

Christmas Day was lovely. I slept in to 10:30am and basically ate for the rest of the day. Around 5pm I started to get distracted – thinking about the days ahead.

Nicki and Mat left on Boxing Day and I headed out for 3 days by myself. I was a total mess. There were tears that morning – the type of crying that sounds more like you are hyperventilating. I didn’t want to go. I was scared of being alone. I was stressed out about the river crossings.

Thankfully Tommy accompanied me for the first 12km, which included two river crossings, which were, of course, totally fine. Then I was on my own. To be honest, the three days are a blur because I just put my foot down and legged it from hut to hut. I didn’t stop to enjoy the scenery or take anything in. I simply wanted to get it done. To get to the next hut in would hopefully meet another hiker so I had someone to talk to. Thankfully I teamed up with one, Mark, to do the final river crossing. Again, it was totally fine. Talk about making a mountain out of a mole hill Lucy.

Getting my mojo back

Gradually, things got better. I teamed up with some local runners to take on the mighty Goat Pass. I summited the highest point of the trail. I tackled the Two Thumb Range by myself and ran along the most beautiful single track which had views over the crystal blue Lake Tekapo and Mt Cook. In other words, I got my mojo back.

Of course, there were still some crappy moments – like slipping over when trying to cross Bush Stream. As I went to take a step forward, I lost my footing and before I knew it, I was fully submerged in the river. I somehow managed to lunge forward onto a shallow bed of rocks about 1.5m in front of me. I stripped off my pack and sat on the river bank for about five minutes, completely shaken. I ate a sandwich, put my pack back on and went on to tackle the next four crossings.

I also ran what was possibly the worst trail of the trip - the Mararoa River Track. Basically, it wasn't a track. I was simply pushing my way through grass as high as my shoulders, falling into boggy marshes that went up to my thighs and bush bashing my way through gorse bushes, which are basically just super sturdy, giant prickle bushes. It was poorly marked so I was constantly second guessing if I was going the right way. Oh, and it started pissing down rain. This went on for 18kms. I was completely drenched and frustrated. Tommy joined me for moral support for the final 7km, which made it a little better. A cup of tea has never tasted so good as it did when I finally got to the van!

In the final weeks we also had an influx of friends and family join. First, Scooby from London joined me for one day. Then we met Tommy’s brother, sister and her boyfriend in Twizel. Then Alex joined us. Then Laura and Phil met us at Lake Hawea. Finally, Melissa flew in from NYC as a surprise. I had my own little entourage and they made the whole experience super positive. There was no room to get worried about anything. 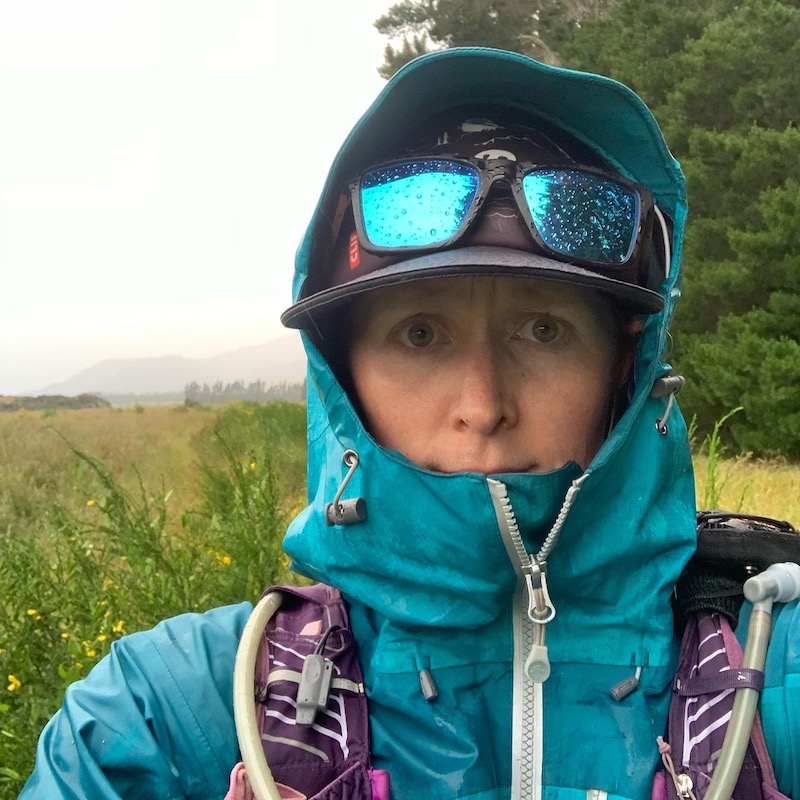 We also covered some of the most beautiful sections of the trail – Breast Hill, Montotapu Ranges, Arrowtown. The overnights were now something I looked forward to because I was sharing it with friends. It was fun. Super fun.

Day 63 was one of my favourite days. It was through the Longwood Forest. We had been warned of knee-high mud and bogs. Tommy joined me for the day and we had a ball – jumping over puddles and traversing our way around muddy pits. It was like a game and I felt like a big kid. The 56km flew by.

I can honestly say, the final day was one of the best in my life. I had run 20kms extra the penultimate day to make sure my last day was just a cruisey marathon.

The terrain wasn’t inspiring. In fact it was some of the worst on the trail. But Tommy joined me for the entire time. It felt so fitting that he was by my side for the final day.

First up was 9kms on a busy road. Then 10kms on a gravel walkway with our friend Laura, which was pleasant. Then 16kms on a State Highway which was very popular with logging trucks. We had to leap off the road ever few minutes to avoid being mown down.

Finally, it was 7km across farmland onto a coastal track to the Bluff signpost. We took our time, taking in the scenery, chatting about the trip, facetiming my parents. The final km was brilliant. Friends had laid out signs for me with silly quotes which made me laugh. As I rounded the final bend, I got emotional for a second but then I couldn’t wipe the smile off my face. A group of girl guides had lined up and I gave them all high fives. I hugged my crew. I hugged Tommy.

Packing for a 66-day run across NZ